As we worship in place today, we light a Peace Candle in our home.

May this flame be a sign of our prayer for peace within us, among us, to the ends of the earth.

The flame joins us in spirit across distance, along with our sister church in Armenia, Colombia.

HWB 327 | Great is thy faithfulness

Sharing of Joys and Concerns

Thanks to everyone who helped lead today’s service

Well, what do you preach the Sunday after a highly contested, highly consequential election in a global super-power?

It’s times like this when I’m especially grateful for the lectionary - this cycle of scriptures we share with other Christians around the world.  That way if the scripture is entirely unrelated to current events, or is so on the nose as to appear hand-picked for this particular occasion, we preachers can say “the lectionary made me do it.”

And, as we slowly emerge from an insanely long election season, we’re reminded that the lectionary has its own season and rhythms.  Case in point – the lectionary calendar is winding down, and Advent, just around the corner, begins not just a new season, but a new year.  People keep saying that 2020 has been a crazy year, but in church-speak, this Year A of the lectionary cycle has really been a doozy.  Thank God it’s about to be Year B.

And as the lectionary cycle nears its end, every year, it goes apocalyptic.  The Day of the Lord in the Hebrew Scriptures, the so-called Second Coming in the New Testament.  The new heavens and new earth, the end of time as we know it, and all that.

That’s why we get “The parable of the ten bridesmaids,” a passage unique to Matthew, the featured gospel of Year A.  Matthew is written soon enough after Jesus’ life that there is still the expectation of his return to earth in a glorified form, but long enough after that the feelings of imminence are fading, and questions of ‘why the delay?’ are prominent.  For its original audience, this parable addresses that situation.

The parable is of a wedding festival – mostly the long hours of waiting before the festival, which itself would last for days.  It centers around ten bridesmaids waiting outside the home of the groom’s parents where the wedding festivities would take place.  Half of them show up with their lanterns, ready for the scheduled start time, but half show up with extra supplies, extra oil for their lamps, apparently anticipating a long wait, or just practicing in case they ever have children who will inevitably forget to bring their own oil, or snacks, or gloves, coats, lip balm, or whatever else it is a parent figures they always need to have on hand, no matter how long the wait.  The parable calls that second group wise, and the first group, in the Greek, morai, which is where we get our word “moron,” translated as “foolish.”  The bridegroom takes so long to arrive that the wise and the foolish fall asleep.  When a shout goes out at midnight that it’s finally time to come out and greet the bridegroom, the five wise ones get up and trim the wicks of their oil-filled lanterns so the flame will burn bright, while the five foolish ones realize they’re about out, asking the wise for oil.  The wise ones decide they have none to spare or share and tell the other five they’ll have to go buy some for themselves, which they do.  But while they’re out the bridegroom arrives, the whole processional heads into the  home for the banquet, and when the other five get back, they find that the door is shut.  They call out for it to be opened, but the bridegroom says, in the final words of the parable: “Truly I tell you, I do not know you.”

Now I’m not sure how this parable sounds to you regarding where it falls on the spectrum of not-relevant-to-current-events to spot-on-for-the-moment, but I’m seeing some unavoidable parallels to where we are at right now. I mean how much more on the nose can you get than a story that contains a 50/50 split between wise ones and morons, with no shades of gray in between, all of them staying up way too late and falling asleep before the hoped for finale, ending with half of them rejoicing and half of them feeling like they got duped.  Clearly the creators of the lectionary foresaw this day and laughed.  Even that painful final line might have echoes in your own life as you think about certain family members and perhaps our nation at large: Do I even know you?

Of all the moments in this parable, the scene I find most compelling for our moment isn’t the one inside the festival, but the one outside the house where the ten women are waiting together.  The great festival has not yet started, the bridegroom has not yet arrived, and the shout has not yet gone out that he’s about the arrive.

Here is the way one artist reimagines that scene. 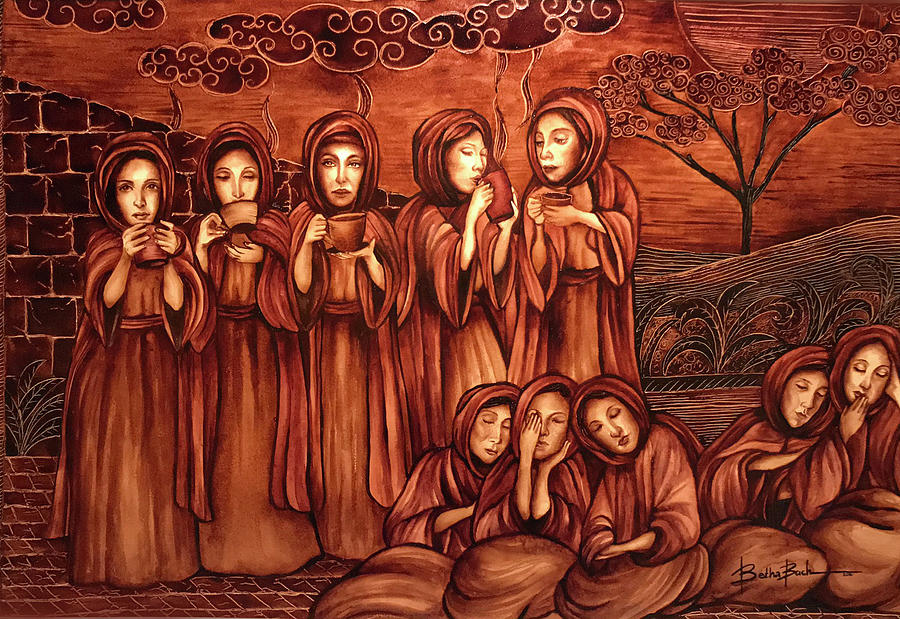 This is a painting by Betha Bach.  She was born in the Philippines and now lives with her husband in Florida.  This is part of a series of paintings she did with coffee themes.  The paint literally is a mix of condensed coffee and other ingredients.  And she was kind enough to put a phone number on her website to contact her.  So I actually got to talk with her to get her permission to share this.

So rather than extra oil for their lamps, the wise ones have remembered to bring their French press.

Now I do have to say that within the parable as it is told, the problem isn’t that some of the women go to sleep, and some of them stay awake.  Wakefulness and watchfulness are important themes in scripture, and will actually be our theme throughout Advent, but that’s not the focus of the parable.  All of the women end up going to sleep, and  there’s no judgement about that being a bad thing.  I mean, it was late, and at some point, everybody has to sleep.  In fact, the wise ones were probably those who went to bed first and didn’t stay up thinking they could outlast the wait.

But the connection point in this parable and in this painting, and in this sermon, is the need to have with you whatever it is you need to sustain yourself – whether oil, or a warm caffeinated drink, or otherwise.  If you’re in it for the long haul, and we are in it for the long haul, then the wise and only way to be in this world is to fortify your soul, keep that wick trimmed so the light burns clean and bright.

As much as my liberal mind wants to make this parable about inclusion, or exclusion, it also isn’t primarily about that.  The central question isn’t who is in and who is out of the kingdom of God, the primary question is what does it mean to be wise in a world where the end is nowhere in sight.  That’s what Matthew is trying to address to his community.  The foolish ones are those who think it’s ending soon, that Jesus’ return could happen any moment.  The wise ones are the ones who are planning on those lamps needing lots of oil to keep burning long into the night and early morning.

And I’m going to go out on a limb here and say that the world is not going to end in any of our lifetime.  Even for little CMC newborn babies Jonathan Jaquet, son Gina and Tim, and Luka Miller, son of Janelle and Nate.  Even though there might be some massive changes in the coming decades I’m going to suggest that it is highly likely that the world will not end in any of our lifetime.

That means we are living inside this scene from this parable our whole lives - all of us - wise and foolish, genius and moron and everyone in between.

How do we occupy this space?  And how do we live with wisdom even though we sometimes get weary?

Because there actually is a wise way to proceed, and a foolish way to proceed.  The foolish way is to assume that everything is going to resolve quickly and neatly and easily.  That we need not bring any soul supplies for the task at hand, for the work ahead.  That we don’t need to learn how to be actively patient, or patiently active.  That the party is going to be great and we’re not really going to have to do anything in order to enjoy the festivities.  Or that God is going to intervene anytime now and solve our problems.

Pour another cup, sing another song, say another prayer, befriend another neighbor, cultivate beloved community with the wise and the foolish, put a little more oil in your lamp and shine your light.