Permission to podcast/stream the music in this service obtained through One License with license A-727859.

In this Advent season focused on the essentials, we have now reached the essential story.  Not that the others aren’t important – Jesus calling to be watchful for the coming of the Human One, John the Baptist’s claim that one more powerful than he is coming, the hopeful words of the prophets Isaiah and Micah, even the birth of Jesus – these are all part of the holy drama of the season.  But for any of those prophetic words to be fulfilled, for Jesus to be born in the first place, it took a young woman willing to birth Christ into the world.  It took Mary, young Mary, and her encounter with the angel who told her to not be afraid.  The messenger who invited her to partner with God, at great risk to herself.  And it took Mary’s acceptance of this strange burden to bring forth the one whose kin-dom shall have no end.

On this forth week of Advent, the final Sunday before Christmas, we light the candle of love, and we ponder this essential story.

I suppose the other three gospels might beg to differ on its essentialness.  Matthew does mention that Mary was “found to be with child by the Holy Spirit,” but proceeds to focus on the person of Joseph who himself receives an angelic visit before and after Jesus is born.  Mark and John, very likely the first and last of the biblical gospels written, aren’t interested at all in Jesus’ human origins.  Mark begins with Jesus as a full grown adult.  John, after tracing Jesus’ origins all the way back to creation, “In the beginning was the Word,” gives a one sentence birth story that leaves out the parents: “And the Word become flesh and lived among us.”

None of the others include Gabriel’s visit to Mary.

Now I’m rather fond of the fact that our tradition doesn’t have one single certified version of Jesus’ birth – or life, or death and resurrection.  I think it’s a beautiful thing that each of the gospels in the Bible, and each book of the New Testament - written over the course of maybe half a century - each book was written to a different community, with a different set of concerns, in a particular time and place. And we have that collection as our sacred scriptures, like a sacred conversation, each perspective adding its own gift.

I’d love to know what really happened.  Personally I’m not invested in it having happened in any particular way.  And if Mark and John and Paul can illustrate a Christian faith without referencing mandatory beliefs about Jesus’ birth, I feel pretty good about some flexibility being built into the tradition.

Luke is the only biblical writer to bring Mary to the forefront, including this story of Mary being found by an angel who has a most mysterious and glorious invitation for her.  And Luke’s questions are not those of a 21st century westerner.

What if Luke is asking a question that can only be answered by this story?  And what if that question goes something like this: OK, so if you’re on board with me that Jesus was special.  That he illuminated who God is and who we are.  That he was this pure embodiment of God’s presence among us, God’s Son we could say.  Then does a person like this just appear on the scene?  Does God just show up in human form whenever God wishes?  Wah-lah.

Or, does God need human partners to do God’s work?  For Jesus to be born, did God need to seek out someone who was willing to bear this child?  And could it be that without the willingness of a young woman to actively, in her body, carry and co-create this life, could it be that none of this would have happened?  Or if she had said No that God would have had to move on to another person?  Or perhaps had already done that countless times?  And what must that have been like?  There must have been some kind of messenger who gave the invitation.  And there must have been this internal dialogue within this young woman about what she was being asked to do.

Song: STS 11 No wind at the window, v. 2
“O Mary, O Mary, don’t hide from my face.  Be glad that you’re favored and filled with God’s grace.  The time for redeeming the world has begun; and you are requested to mother God’s Son.”

We have just begun Year C of the lectionary cycle featuring Luke’s gospel, and it is Luke that gives us the fullest picture of Mary leading up to the birth of Jesus.  We see Mary, alone, visited by the angel Gabriel who tells her, in so many words, that she is requested to mother’s God’s son.  After her consent, we see Mary making a hurried and long journey to be with her older cousin Elizabeth, herself six months pregnant.  We can imagine these women on opposite ends of child bearing years relishing one another’s presence, growing in solidarity with one another.  We see Mary giving her fierce proclamation, that God has filled the hungry with good things and sent the rich away empty.  We see her in Bethlehem after another long journey, giving birth to Jesus, postpartum recovery, visited by shepherds, pondering everything in her heart.

Contemporary theologians have done a lot of rethinking about Mary as more than just a passive and compliant vessel for Jesus to enter the world.

Elizabeth Johnson, a White feminist theologian says this:  “This young peasant girl discerns the voice of God in her life commissioning her to a momentous task.  Exercising independent thought and action, she asks questions, takes counsel with her own soul….A woman of Spirit, she embarks on the task of partnering with God in the work of redemption.”

Diana Hayes, writing as a Black Catholic womanist theologian, says this: “Black Catholics also speak a new and challenging word about Mary, the mother of God, rejecting the symbol of passivity for the courageous and outrageous authority of a young unwed mother who had faith in herself and in her God…The image of Mary and the infant Jesus is an image of strength and courage, of a mother’s determination to bring forth this child regardless of the circumstances and conditions opposing her, a situation in which many Black women have often found themselves.”  Both quotes found HERE.

This past Wednesday I was on a local faith leaders Zoom call.  The opening meditation was presented by Elaina Bueno who chairs Ohio Progressive Asian Women’s Leadership.  She shared a piece she had recently come across that gives another corrective to how Mary has been mis-remembered in the tradition.  It’s a remake of the popular Christmas hymn “Mary did you know?” and goes like this:

Luke 1 does give a prominent place to women in the story of redemption.  To women, and the poor, and the occupied.  Luke proposes that redemption is not just for them.  But the redemption of the world comes through them.  They are active agents of God’s redeeming love which can be unrecognizable if you’re unwilling to honor someone like Mary.  As the song says, this kind of redemption leads to salvation for many, destruction for some.

Song: STS 11 No wind at the window, v. 3
“This child must be born that the kingdom might come: salvation for many, destruction for some: both end and beginning, both message and sign; both victory and victim, both yours and divine.”

I don’t hear these writers doing this, but I suppose there could be the danger of making a strong and powerful Mary just as inaccessible as a compliant virgin mother.  Mary is not a super hero, although that’s not a bad idea for a t-shirt.

What if what makes this story about the divine messenger and Mary the God-bearer so essential is that this is how God works all the time?  Not just a one-time occurrence to get Jesus into the world, but a moment to moment way of relating to the whole world.  What if Divine Love is always, always visiting the present moment, looking for someone to say Yes?  What if Divine Love always needs the consent of each creature who might become, like Mary, a bearer of God, a mother of Christ.  What if God is always in the business of lifting up the lowly, and destroying arrogance?

The angel shows up as a pillar of light on a forest walk, or a winged messenger complete with feathers and a beak and a stare that sees right past our façade.  Or a rock, or a gust of wind, or a thick expansive silence.  Or the annoying neighbor who always plays their music a little too loud.  Or probably all of these.  Any of these can be God’s way of getting our attention.  “Greetings favored one.  The Lord is with you.”  That’s an odd greeting.  “Do not be afraid.”  Do not be afraid.  Do not be led by fear.  Who me?

God requests that you bear a child.  The Holy Spirit seeks to inhabit your being and to overshadow you with love.

At some point we actually listen.  We ask questions.  We listen some more.  Finally, we take the plunge: Well, Here I am.

The medieval mystic Meister Eckhart called this the Eternal Birth.  Not just the one-time birth of Jesus but the Eternal birth of Christ.  This is what he said about it in a sermon:

“We are celebrating the feast of the Eternal Birth which God the Father has borne and never ceases to bear in all eternity... But if it takes not place in me, what avails it? Everything lies in this, that it should take place in me."  Meister Eckhart, Pred. i., “Mystische Schriften,” p. 13.  Compare Tauler, Sermon on the Nativity of Our Lady (The inner way, p. 167).

No payment was promised, no promises made; no wedding was dated, no blueprint displayed.  Yet Mary, consenting to what none could guess, replied with conviction, “Tell God I say ‘Yes.’” 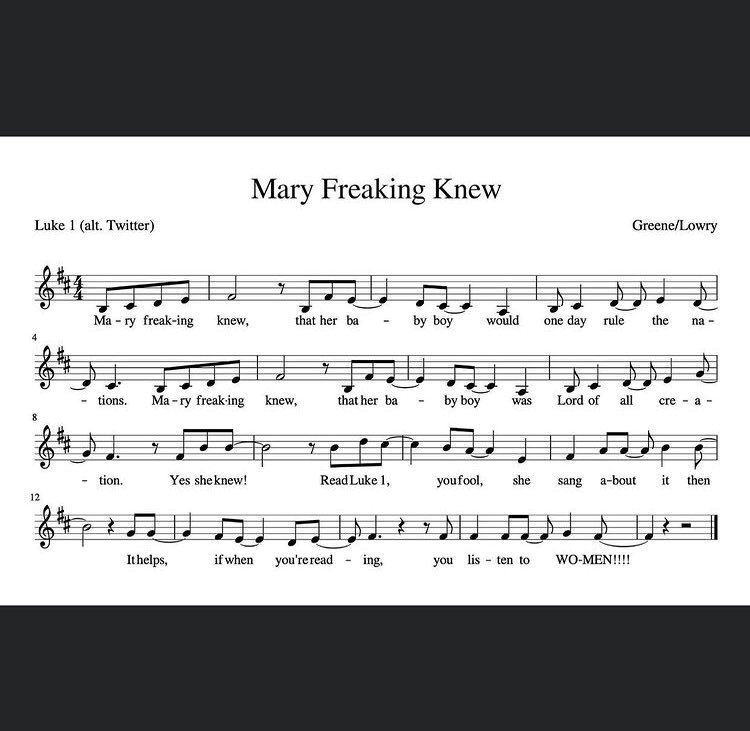