The video above includes the full service for today.  You can click on the four arrows in the bottom right of the video to make it full screen.  Clicking the three lines next to that will pull up the menu.

Special thanks to Elisa and Matthew Leahy for video production. 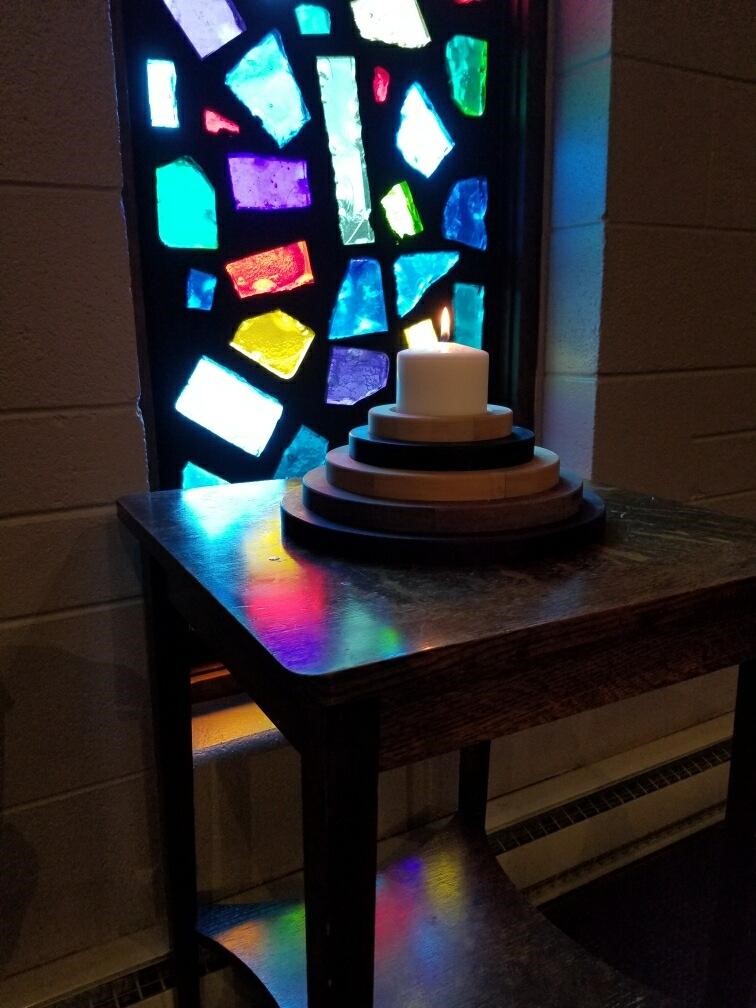 HWB 1 | What is this place | Jon and Krista Mueller

OK, so let’s get this out of the way, right away.  For the second week in a row, the second parable in a row, we have a parable, followed by the disciples coming to Jesus, asking for an explanation, to which Jesus gives a precise decoding of the symbolism within the parable.  For all the reasons Mark mentioned last week with the Parable of the Sower and its explanation, this is bothersome.  Parables are supposed to provoke our spiritual imagination, right?  Not serve as a formula where each part equals something else.  Couldn’t this have been one of those times Jesus responded to their question with something like: “I don’t know, what do you think it means?”

What’s doubly bothersome about this Parable of the weeds among the wheat is that the explanation seems to give a clear division of the world into two kinds of people.  The good seed, sown by the Divine Representative, the Human One, the wheat; and bad seed, sown by the evil one, the weeds.  The bad seed, the children of the evil one, are harvested by the angels and destined for the fire.  And the good seed are destined, as it says, to “shine like the sun in the kin-dom of their Father/Mother God.

If it’s any consolation, scholars aren’t convinced the explanations of either of these parables represent the original teachings of Jesus.  They may be more a reflection of Matthew’s explanation to his community, several generations after Jesus lived.  But there’s no way to be sure, and the fact remains that it’s in our Bible, so we have to deal with it.

And we will deal with that explanation of the parable.  But first, let’s give ourselves a little interpretive freedom and look at the parable itself, the part of the overall reading acted out so wonderfully by the Cortes kids.

In the Parable of the Sower, which is told right before this, the difference is in the condition of the soil on which the seed is generously thrown by the Divine Sower.  All the seed was supposedly the same, having the ability to grow if sown in good soil.

In this parable the soil all appears to be good.  No thorns or rocks or compacted path here.  Now it’s the seeds that are different, and the sowers.  The owner of the field sows good seed, wheat.  And, while everybody was asleep, an enemy sneaks into the field and sows weed seed, and then slips away before being seen.

Last week Mark mentioned having been taught to always look for the surprise in the parable.  In the Zoom parables discussion group I was a part of several people noted that this was a new and helpful thought for understanding parables.

This wheat and weeds parable is full of surprises, or at least irregularities in first century agricultural practices.

For starters, it’s soon revealed that this owner of the field has servants.  These laborers would typically be doing the planting, but instead the owner does the work herself, himself.  It’s definitely a surprise for someone to come and sow weeds.  Where exactly does one purchase or collect weed seeds to be sown in the field of one’s enemy?  It would have been unusual, as the owner instructed, when harvest time does come, to collect the weeds first.  Usually you just focus on picking the good stuff, and then do whatever you need to do with what’s left.

But the biggest surprise here is that the field owner, the sower, opts to let the weeds grow right alongside the wheat all the way through the growing season, saying, “let them grow together until harvest.”  I’ve never taken a master gardener class, but I’m assuming this isn’t considered a best practice.

So if we’re looking at just the parable itself, that’s what we have in front of us.

So what’s going on here?

Well, what do you think?
Here are some additional seeds of thought to throw into the field:

Looking out over this field we might consider that wheat itself was once a weed, if you want to define weed by something humans aren’t cultivating for their own benefit.  It was out there doing its thing in the wild like it had for millions of years before we chose and adapted it.

Seeing the wheat in this way might enable us to look differently on these weeds.  Maybe weeds are just plants whose purpose we don’t yet understand.

I remember a sermon at my home church preached by a member who knew all kinds of things about plants.  His visual on the worship table was a bouquet of “weeds,” which he proceeded to go through one by one, giving their medicinal and nutritional value.

Perhaps the owner of the field wishes to let everything grow until harvest to give more time for the harvesters to discover the beneficial qualities of these weeds the enemy has gifted them with.

Or maybe the harvesters aren’t very good at telling the difference between wheat and weeds.  A number of species we now consider invasive were first brought to the West because they were considered beautiful and useful – wheat like.  But we brought them into an ecosphere that wasn’t equipped to balance and harmonize with them, so the wheat became weeds.

Even wheat itself might not have been a great long term choice.  Wes Jackson from the Land Institute in Kansas proposes that it was a mistake to choose the annual variety of wheat – the kind that needs planted from seed every year and has shallow roots.  He’s done extensive research to develop a viable perennial wheat with a remarkably deep root system much better at withstanding dry spells, thus needing less irrigation, and holding the soil together, thus slowing erosion.

This field of wheat and weeds is full of stories and choices and possibilities and against all conventional wisdom and advice from the servants, the field owner wishes to keep all options open.

Or maybe the owner believes that not all plants need be for human benefit and should be given a chance to grow for their own sake.

This past week I added one more layer to my Mennonite street cred and got the Complete Works of Menno Simons.  All of his writings translated from Dutch into English, right here.  1080 pages.  Well done, brother Menno.

Within these pages Menno does make reference to this parable.  For context we can remember that Anabaptists were seen as a radical sect in 16th century Europe, partly because they wouldn’t swear a loyalty oath to any of the princes who were trying to hold together their corner of the world during the turmoil of the Protestant Reformation.  Menno had a price on his head and was frequently on the run.

When Menno mentions “the preachers,” he’s referring to the preachers who condemn Anabaptist beliefs.  And he uses the old word “tares” to mean “weeds.”  Some of you raised on the King James Bible may know this parable as the wheat and the tares.

Menno writes: “O, reader, if the preachers rightly understood this parable and feared God, they would not cry so loudly against us, who, alas, are everywhere called tares (weeds), heretics and conspirators, "Down with the heretics;" even if we were heretics, from which God save us. Oh! what noble wheat they destroy!  (Complete Works p. 750)

In other words, Menno is saying, hey you’re calling us heretics and you think that we’re weeds growing in your field of wheat, but we’re actually wheat and you’re destroying us.  But even we were heretics-  which we’re not – but even if we were weeds, this parable specifically says God allows the wheat and the weeds to grow together until the end, and then God and the angels sort them out, not you.

In other words, now highly paraphrased: If the commandment “Do not kill” isn’t clear enough then at least give this parable a try.  You’ve got to love a good biblical take-down.

The imagery of the tares being burned was not mere metaphor for Pastor Menno and his congregations.  Anabaptists were burned at the stake in an attempt by the state church to weed out the heretics.

It seems that not only are people not so great at separating wheat from weeds in the botanical world, but also when it comes to the world of other people and belief systems.  Having a history as “heretics” and “tares” gives us a competitive advantage in understanding this.  The owner of the field certainly understands.

And then, there’s the matter of that interpretation in Matthew to deal with.  Because even though the owner does patiently wait for the wheat and weeds to grow together, the end does come, and the “weeds” still end up getting picked and burned in the “furnace of fire.”

One way we might interpret that interpretation, which seems to divide the world into two kinds of people, is through the words of Aleksander Solzhenitsyn, a man familiar with being deemed a weed.  He was a Russian author highly critical of the abuses of the USSR, sentenced to an eight year term in a labor camp.  In his book Gulag Archipeligo, Solzhenitsyn writes this:

“The line separating good and evil passes not through states, nor between classes, nor between political parties either -- but right through every human heart -- and through all human hearts. This line shifts. Inside us, it oscillates with the years. And even within hearts overwhelmed by evil, one small bridgehead of good is retained.”

In this understanding, there is wheat and there are weeds within each of us.  Because we can’t always tell what is the good seed, and what is the bad seed, and what will change with time, God, in God’s mercy allows it all to grow throughout our whole life.  And in the end, there are plenty of weeds that remain within all of us.  Those weeds must be dealt with, but it is God and the angels who deal with them.

And this is how God deals with our weeds.  God is not interested in stacking up the weeds, pointing to them and tallying just how high that weed pile is.  Not even interested in comparing the size of the weed pile to the wheat pile.  God calls on the angels to come and remove them, and they are thrown into the fire.  To God, they are as immaterial as smoke, drifting away in the wind, which absorbs the smoke into itself, spreads it out so it is no longer toxic.  God is not afraid of weeds or the fire that consumes them.  And the wind of God knows just what to do with smoke.

What’s left is that part of us that has always been and always will be the glory of the divine image.  Let’s call it the persistent wheat that grows amidst the weeds.  It was sometimes hidden, even from ourselves.  But now the weeds are as nothing, and in the closing words of the interpretation of the parable, we are shining “like the sun in the kingdom of the Father/Mother.  Let anyone with ears, listen!”