As we worship in place today,

we light a Peace Candle in our home.

May this flame be a sign of our prayer for peace within us, among us, to the ends of the earth.

The flame joins us in spirit across distance, along with our sister church in Armenia, Colombia.

Hymn | What chains have I been asked to bear? | Becca Lachman (words), Martin family (vocals)

Hymn | My shepherd shall supply me need | Tom Blosser

Thanks to everyone who helped lead today’s service

It’s All Saints Day, today, and as we have done for a number of years now, we will soon light candles on behalf of those who have died.  That’s the main reason why I’m here.  To join you who will be lighting candles at home by lighting candles here.

And as I have gotten in the habit of doing, I will use the sermon time for some storytelling of an Anabaptist forbear.  So we’re looking up at that great cloud of witnesses and picking out one figure to know better.
The person whose story we’ll dwell on today is Abraham op den Graeff.

The first thing you need to know about Abraham is that he was a weaver.  A really good weaver, among the best of his time.  In 1686 he was awarded the first ever Governor’s prize in Pennsylvania for the finest piece of linen woven in the Province, presented by William Penn.  Like many people of his time, the trade he practiced ran in the family.  Abraham was born sometime in the late 1640s in Krefeld, Germany.  He learned weaving from his father.

The family was Mennonite and had left Catholic-controlled land in the early 1600s for the more tolerant Krefeld, under the authority of the Netherlands.  Other Mennonites had done the same, fleeing the threat of fines and imprisonment for their nonconforming faith.  Lots of Mennonite weavers in and around Krefeld.

When Abraham was in his 20s, a group of Quaker missionaries came through the area.  Abraham’s family and a number of other Mennonites converted to Quakerism and soon found that Quakers weren’t quite as tolerated.  And so, enterprising person that he was, we can imagine why news of William Penn’s experiment in Penn’s Woods – Mennonites and Quakers welcome – fear of religious persecution over - would have been attractive to Abraham.

His was one of the 13 families from Krefeld to sail the ship Concord in 1683, arrive in Philadelphia, and found a settlement nearby that came to be called, of all things, Germantown.
Just about everybody on the ship, husbands, wives, and mature children, had skills in some division of labor in the making of linen cloth, whether it be bleacher or dyer or weaver or any other part of the process for flax in the field to become blanket on the bed, or shirt on the back.  Weaving was a family and community affair.

And we can imagine that along with those threads of linen, Abraham op den Graef was also weaving a life.  The old Mennonite threads given to him by his parents and their parents, woven together with the new threads of those compelling Quaker missionaries.  The land and culture of his birth – sturdy, familiar threads - woven into this strange new and exciting land of his choosing.  And how to weave one’s presence with the families and peoples of the American Indians who had been there countless generations prior?  Is a single cloth possible in this colonial experiment? How to carefully harvest and patiently process all these things in such a way that what you weave will be both durable and beautiful for you and your community and your God?

These 13 families make the transition from immigrant to settler, doing what they know how to do well, establishing a weaving industry, as they establish a town and community.

In their Bibles and in their religious gatherings they would have encountered the words of Moses and the Hebrew prophets.  They would have pondered the teachings of Jesus.  They would have considered the epistles, letters written to those early Christian communities - outposts of the kingdom of God in the Roman Empire.

Given their experience in Europe they would have related with Paul’s mistreatment and his affection for these new communities he helped found, like when he writes the Thessalonians: “You yourselves know, brothers and sisters, that our coming to you was not in vain, but though we had already suffered, been shamefully mistreated at Philippi, as you know, we had courage in our God to declare to you the gospel of God in spite of great opposition…So deeply do we care for you that we are determined to share with you not only the gospel of God but also our own selves, because you have become very dear to us.” (1 Thes 2:1-2,8).

Thinking about their own future, they would have related to the words in first John where the writer says, “now what we will be has not yet been revealed” (1 John 3:2).  And they would have noted that Paul and John are just as quick to pastorally criticize these communities for their shortcomings.

There’s a lot the records don’t tell us, so we’re doing some imagining about what those first years were like, but records do show that after five years of living in the New World, Abraham was deeply troubled.  He was witnessing a glaring contradiction: He had come to this land because of its promise of freedom and humane treatment, and that’s pretty much what he had experienced; yet others were being brought to this land explicitly to have their freedom denied – enslaved.  It was troubling enough for Abraham to be a part of something that nobody up that point had done.

On April 18, 1688 he and his brother Dirk op den Graeff, along with two other men, gathered in a Germantown home and put pen to paper, creating the first written American protest against slavery.  Something kind of like an epistle, but it was written as a letter to their brothers and sisters of the Monthly Quaker Meeting.  These four were a Mennonite-Quaker tapestry who carried out their own industry without slave labor, writing to slave owning Quakers, urging them to stop enslaving Africans.  A prophetic and pastoral call to be true to the gospel.

And again, we can imagine Abraham at the loom weaving - this time the ancient, strong threads of scripture woven into the reality of 17th century America – a cloth the variety of which no one had yet dared to make.

It’s both a simple and elegant appeal, and a bit clunky, not winning any Governor’s awards for best written composition of the Province.  The thread that runs all the way through is Jesus’ teaching of the Golden Rule.  Lily’s going to help me by reading directly from the document:

There is a saying that we shall doe to all men like as we will be done ourselves; making no difference of what generation, descent or colour they are. And those who steal or robb men, and those who buy or purchase them, are they not all alike?.... But to bring men hither, or to rob and sell them against their will, we stand against.

The document refers back to religious persecution in Europe from which these men fled, making a direct connection with the suffering of enslaved Africans in America, seeing a piece of themselves in the slaves owned by their fellow Quakers:

In Europe there are many oppressed for conscience sake; and here there are those oppressed who are of a black colour.

Perhaps thinking of their own wives and children working alongside them making cloth, they protest family separation inherent in the slave trade, appealing to the biblical command “Thou shalt not steal.”

Pray, what thing in the world can be done worse towards us, than if men should rob or steal us away, and sell us for slaves to strange countries; separating husbands from their wives and children. Being now that this is not done in the manner we would be done at therefore we contradict and are against this traffic of men-body. And we who profess that it is not lawful to steal, must, likewise, avoid to purchase such things as are stolen, but rather help to stop this robbing and stealing if possible.

Since Quakers professed to be pacifists, the letter provokes the question of needing to defend slavery with violence:

After noting that they await an answer, which they plan to relay to their friends back in Europe that this is how life really is in Pennsylvania, they sign off:

This is from our meeting at Germantown, held ye18 of the 2 month, 1688, to be delivered to the Monthly Meeting…

The letter/epistle/petition/protest document was delivered to the monthly meeting, which passed it up to the quarterly meeting, which sent it off to the annual meeting in New Jersey, which noted in their minutes that they would send it to the London Yearly Meeting where it did not appear in the minutes.

I wonder how we might receive a letter from immigrants, in the country no more than five years, writing in their second language, detailing their own moral shock at the racial injustices they have witnessed around them, calling on us citizen-born to repent.

The Germantown letter disappeared until it resurfaced more than 150 years later, in 1844, and became an important rallying point in the US abolitionist movement.  The original letter is now displayed at Haverford College, about 10 miles from where it was written in Germantown.

Quakers did forbid slavery starting in 1776, 84 years after the letter was written, 89 years before the US abolished slavery at the end of the Civil War.

Abraham was the only one of his siblings to convert back to being a Mennonite.  So we can definitely claim him!  He went on to serve as mayor of Germantown and help establish a booming weaving industry.  He  eventually sold the family land and moved further west into Pennsylvania.  His son, Jacob, also signed a petition.  This one was to the governor of Pennsylvania asking for more protection against the Indians.  Do we claim him?
And stick with me for one more twist in this story.

As the country expanded into other Indian territory, as the Civil War raged right before slavery was abolished, well after Abraham’s time, the Navajo were marched 300 miles into New Mexico and Arizona in order to protect white settlers.  The survivors of the deadly walk were settled in a reservation.  The Navajo were weavers.  They were excellent weavers, but their flocks were decimated.  How to weave back together some semblance of life and culture?  By that time the Germantown cloth industry had expanded into wool and it was this Germantown wool yarn, that made its across the country way to the Navajo Nation, providing them with material for their creations.  A recent innovation in dying resulted in new rich colors.

And so the Navajo, displaced by white settlement, helped heal themselves by weaving pain and trauma and strength and color into their rugs.  For the rest of the 19th century and into the 20th Germantown yarn was closely associated with Navajo rugs.  It means that Abraham’s story, which is a thread of our story, is a small thread of the Navajo story, and their story a small thread of our own.  And when we see a Navajo rug we can think about all the stories woven into that cloth.

The legacy of racism and generational trauma remains with us, but so does the weaving. 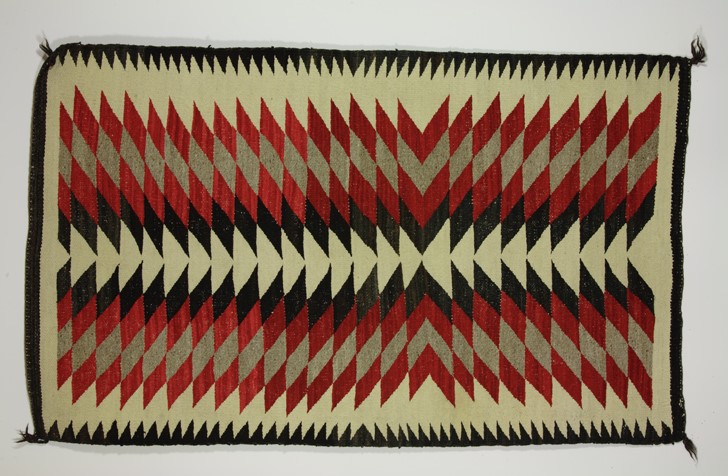 For more information about Abraham op den Graef, Germantown, and the Petition against slavery, see these sites: