In Scott Peck's book The Road Less Traveled the first sentence is "life is hard." Before April 20 I could count on three fingers significant "life is hard" scenarios. One left me reeling emotionally, another almost killed me, and the third left me in a spiritual abyss.

In 2004, after living in North Cyprus and then southeastern Turkey for 17 years, my husband Wilbur was abducted by three young guys who held him at gunpoint and threatened to kill him. They released him a couple hours later. We were told to leave. We packed up 14 years of home life in Gaziantep in 14 days; mid-school year we moved to North America. Our three teenage sons faced the challenges of loss, adjustment, and resettling with incredible resilience. The following year I completed my Master in Counseling Degree, feeling as though I needed to counsel myself.

About 11 years later, Wilbur and I were nearly killed in an accident. I had 11 surgeries, most were reconstructive on my face. I remember telling the specialist who removed a plate underneath my left eye to lower it, that I was so glad I could see. He said, "You can be grateful you are alive."

One year later, while still vulnerable in our recoveries, the organization Wilbur and I had served for in our adult lives, put us on a lifeboat with some essential supplies and let us loose at open sea. They prayed for us and thanked us for our years of service and then sailed their ship over the horizon, with the pressing call to save more souls.

This year on April 20, I received a call from Canada where my parents and siblings all live in southern Ontario. My 88-year-old father collapsed at home after returning from his morning walk. Half an hour later I received the follow up call. Dad was gone. I called the Canadian Embassy. They gave their condolences and informed me that I could enter Canada with my birth certificate. I then called the funeral home; reality hit and sunk deep. Due to the 14-day quarantine requirement, I would not be able to be at my dad's burial. I would not be able to be with my mom and my siblings. I thought to myself "this is hard" and a lament rose up within my soul.

Francis of Assisi said, "If you live your life with no expectation then everything is a gift."

I never expected, but hoped, that I would be near my parents when their time on earth finished. I fully expected though, to attend my parent's funeral. I expected to be with the remaining parent and my siblings in the sacred rites of mourning and releasing. Losing dad was hard and that loss intensified by not being with my mom, and 9 other family members, as dad was laid to rest under the pine tree in the windswept cemetery on a brisk spring day.

For the next few days Wilbur and I lived in a virtual world of video messenger and iPad, participating in meetings as we planned dad's burial. Two days later dad was buried. My brother and sisters videoed the activities. Wilbur and I dressed up for the day and joined in as best we could. When they stopped for coffee at Tim Hortons after the burial, I made coffee. We had the same menu after the service and ate "with" them. We were grateful for the gift of technology and the spirit of the family to include us as much as possible in these most unusual circumstances. We were comforted. My mom said that she is at peace.

Last year Wilbur and I spent 7 months in Ontario. I had not lived with my family for 40 years. We spent extensive time with dad and mom. Wilbur and dad went on historical forages tracking down the cemeteries where the first settlers (after the First Nation's people) to Waterloo County, who happened to be Mennonites, were buried. The four of us went out for Saturday breakfasts and played endless competitive games of Qwirkle and the marble game.

Two weeks after dad's passing, the siblings began an email on the musings of dad. It's evolved into reflective writings of each sibling's relationship with dad and stories about him. When it was initially posted and siblings added to it, I realized that as the only child not living close to the family, my journey in grief may look somewhat different. It felt slower, obstructed with disbelief and denial. Soon, though, I will add my stories.

Dad was solid as gold. He loved God, his family, and the world. He was big picture, innovative, and curious. He retreated from "naval gazing" yet valued connection. He had five daughters and a son. He sometimes seemed bemused by his five daughters. Like Tevye in Fiddler on the Roof, he attempted to maintain his traditions as his daughters became independent and self-defined.

The last time I saw dad was the weekend of his 88th birthday. At that point we didn't know that soon the USA and Canada would go in a lockdown because of COVID-19. Wilbur and I took dad and mom out for a final birthday breakfast before returning to Ohio. There dad wanted to talk about his grandson who is gay. I was proud of dad for initiating and engaging in a conversation that could be emotionally laden. Dad has had a reputation of walking out of a room when he becomes uncomfortable. As we talked I sensed dad's love. Somewhere in the breakfast conversations I told dad that like Job, "Though God slay me yet I will trust God." Dad's eyes moistened. I felt, again, that my dad is an anchor for me and someone who has my back.

Sunday evening, the night before dad's passing, mom mistakenly called the family on their newly established iPad. We all chatted about our day. At one point someone said, "Tell us a story, dad." He told a short story. Then I said, "Dad, would you recite that German prayer?" And that is one of the last things I heard dad say:

Translation:
Weary now, I go to rest,
Close my eyes in slumber blest.
Father, may Thy watchful eye
Guard the bed on which I lie.*

The next morning dad returned from his morning walk and then, like Enoch, he "walked with God: and he was no more; for God took him" (Genesis 5:21-24).

"Don't close the book when bad things happen in your life,
Just turn the page and begin a new chapter." -unknown

Dad will always be a main character in the book of my life's story, even as I turn the page. 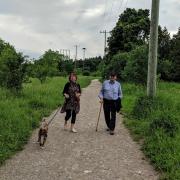 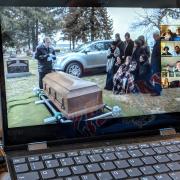 This week watching the service on YouTube with our sons and their significant others (Columbus, Kansas, Japan) by Zoom. Dad talked with each of his 24 grandchildren in the month before his passing. 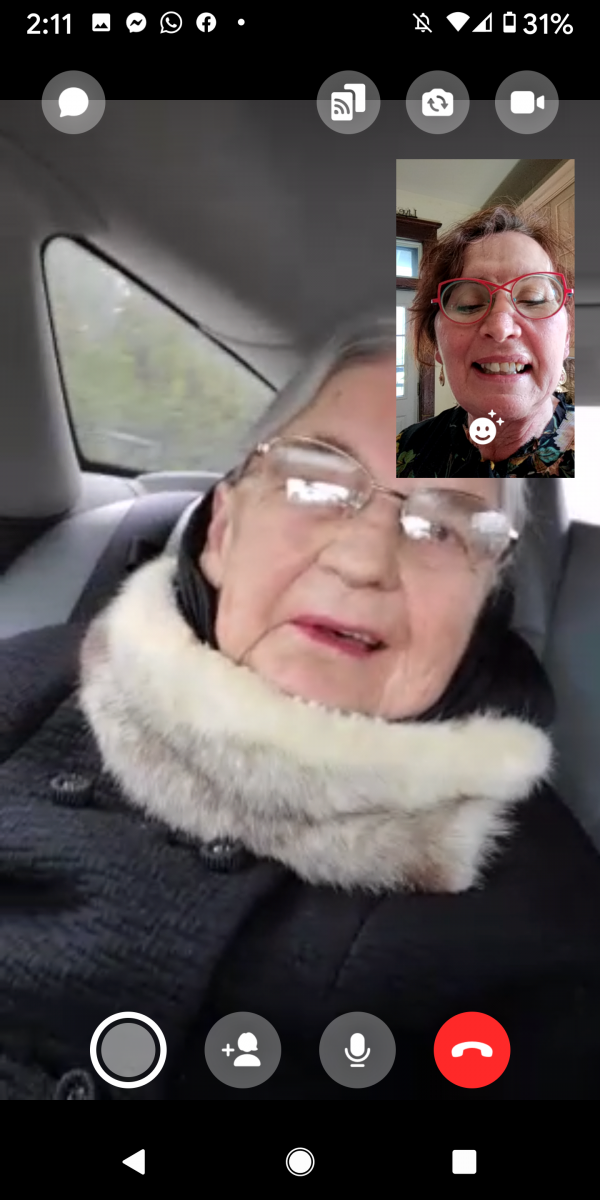 Screenshot of mom and me while she is returning home after the burial, "I have peace."